Roeder has worked in the packaging industry since 2009, and is well versed in capital equipment sales, aftermarket sales, robotic automation and project management. He has worked with numerous Fortune 500 companies and also has a background in project management and field service. Based in Spokane, Wash., his territory includes Alaska, Colo., Idaho, Kan., Mont., N.D., Neb., Nev., Ore., S.D., Utah, Wash., Wyo. as well as western Canada.

Griggs is a 20-plus year veteran of the packaging industry and is experienced selling capital equipment to various markets and channels, including: industrial, food processing, pharmaceutical and medical, construction, and distribution. She resides in southern California and will be responsible for Ariz., Calif., N.M., Las Vegas, Okla. and Texas. 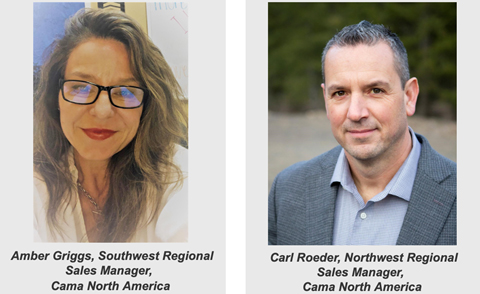 Based in Buffalo Gove, Ill., Cama North America is a subsidiary of Cama Group in Lecco, Italy. Cama is a leading supplier of secondary packaging, robotic systems, and integrated packaging solutions for a wide variety of markets, including food packaging and non-food applications.

Heavy vibrations are sent through the molds to shake them and give the chocolates a ﬂat, even ﬁnish. There’s one key ingredient used to make chocolate ...
Read More →

Reserve Your Achieve a Perfect Seal Kit from Enercon