Robots and cobots address labor shortages, e-commerce growth and the need for flexibility on the production line.

CPGS Embrace Robotics as a Tool to Automate Production, Storage, and Distribution Processes

By Jorge Izquierdo, Vice President of Market Development for PMMI, The Association for Packaging and Processing Technologies

For the third-straight quarter, robot sales in North America hit a record high in the second quarter of 2022, and are on track to achieve another record year. In the first half of 2022, orders grew 26% and revenue jumped 29% compared to the same period in 2021. According to the Association for Advancing Automation (A3), 41% of the orders sold in Q2 2022 came from non-automotive companies, and largely from the food and consumer goods industry. 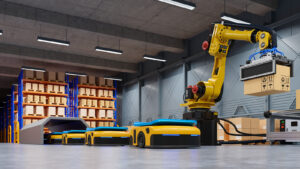 Three out of five CPG companies using robotics plan to increase installations during the next five years, particularly for secondary and transport packaging applications.

While automotive entities have long been the frontrunner in deploying robotics and automation, the last few years have seen food and consumer goods, life sciences, and other industries grow at even higher rates according to A3.

Consumer packaged goods (CPG) companies have embraced robotics as a tool to automate production, storage, and distribution processes, according to The Future of Automation in Packaging and Processing, a white paper produced by PMMI, The Association for Packaging and Processing Technologies. Deploying automated guided vehicles, industrial robots, collaborative robots (cobots), and mobile robots helps address labor shortages, growth in e-commerce, and the need for flexibility on the production line. For example, more functional end-of-arm tooling can pick a larger variety of shapes, reach deeper, and change tools faster. Meanwhile, as labor costs rise, robot and cobot prices are declining, accelerating the return on investment.

In addition, today’s robots are more durable, significantly faster, capable of lifting heavier loads, and easier to operate and program, reducing the skill level needed for successful integration. Improvements in functionality such as vision, self-learning, and artificial intelligence will spur adoption in processing, primary packaging, secondary packaging, and transport packaging applications. As a result, usage is growing along the entire line from initial inputs to the warehouse, according to Robots & Cobots, an Automated Future, another white paper published this year by PMMI.

Most CPG companies (84%) operate robotics somewhere on the line, and this number will rise to 93% in the next five years as shown in a forecast presented in the Robots & Cobots, an Automated Future infographic. Deployment of cobots will also see strong growth with usage more than doubling from 27% in 2022 to 57% in 2027.

Spend on automation will be strong in the food industry, where 80% of respondents to a PMMI survey say they plan to buy more cobots during the next two years.

The Future of Automation white paper notes that cobots are particularly attractive for smaller enterprises due to their lower cost and simpler operation. A high degree of mobility, flexibility, and ease of use appeal to companies that lack the in-house skill sets needed to operate more sophisticated robotic systems.

Although many CPG companies have deployed robotics, there’s substantial room for growth. At present, only one-third of CPG companies have robots on more than 50% of their lines, and one-fourth have equipped less than 10% of their lines. Three out of five CPG companies using robotics plan to increase installations during the next five years, particularly for secondary and transport packaging applications. Spend will be strong in the food industry where 80% of respondents plan to buy more robots, particularly cobots, during the next two years.

Barton Group, LLC, announced a unique, ultra-low-cost, stand-up pouch for a wide range of liquid. “This is the latest in a series of eight patents that ...
Read More →

Palletizing and Stretch Wrapping Innovations for Greater Flexibility and Productivity