Compared to manual inspection, machine vision systems deploying area-scan cameras offer improved accuracy and far higher consistency, plus they work non-stop without suffering fatigue or requiring a paycheck. For all their advantages, however, there are limitations to area-scan cameras in more challenging machine vision tasks. For example, when an object under inspection is large, continuously moving, or the imaging task requires extremely high resolution without blurring, a line scan camera is a far better choice.

There are key differences between area-scan and line-scan cameras. Most important is how an image is acquired. Unlike an area-scan camera that captures the entire object in one 4:3 frame, a line-scan camera uses a single row of light-sensitive pixels that image across the object, line-by-line, accompanied by high intensity lighting. A completed image is built by stitching together the lines, much like a fax machine.

Here is how it works: Each pixel accumulates photoelectric charges relative to the light from the object imaged onto that pixel. Next, a readout register amplifies, adjusts and digitizes the charges, all while the next row of pixels is being exposed. The time between exposure and readout is the “line rate” calculated in kilohertz (kHz). To avoid under- or over-sampling an object, a programmable encoder connected to, say, a conveyor or web, measures speed and precisely synchronizes the camera in pulses. Each line of the image is then stitched together in a predetermined number to form a frame for analyzing with software. Any defects found are recorded on roll maps.

Because of this design, line-scan cameras excel at producing a flat image of cylindrical objects, at imaging very large objects with high resolution, or at producing images of objects in continuous movement past a fixed point, such as parts on an assembly line or web applications. Line-scan inspection applications are wide and varied including paper, rolls of metal, fiber, railway inspection, solar cells, textiles, pharmaceuticals, semiconductors and postal sorting. Plus, the cameras can fit into tight spaces, for example when it must see through rollers on a conveyor to acquire images of the bottom of a part.

Like most advanced technology, line-scan cameras are constantly improving in performance while becoming more and more affordable. Manufacturers are producing cameras with increasingly smaller pixels and higher line rates to detect increasingly smaller surface error sizes of PCBs and liquid-crystal displays, among others.

Additional trends to watch are explored in this article, specifically the use of line- scan cameras in color inspection and in the emerging 3D class of applications.

For many years line-scan cameras have been deployed in color inspection, a trend mainly driven by the needs of the printing industry. The three methods in line scan color imaging cameras are bilinear, trilinear and three-chip designs. The trilinear approach — which uses three linear arrays (RGB channels) fabricated on a silicon die — has gained strong support by imaging professionals because it captures details with outstanding color fidelity. Trilinear technology also simplifies camera design by requiring a smaller footprint and it reduces system-level costs with its use of standard lenses. In contrast, bilinear has less resolution than trilinear despite having the same number of pixels. Also, bilinear color information has to be interpolated since not ever pixel is imaged in all 3 colors.

The Trilinear approach calls for each of the three arrays to capture one primary color (RGB) simultaneously but at somewhat different locations on a moving object. To form a full color image the three color channels are combined. To compensate for the separation, referred to as spatial correction, the first and second arrays are buffered to match with the third. The downside of using only three channels is relatively low spectral resolution. Manufacturers have improved performance with image-based color measuring approaches that enable color to be measured on the whole surface of the object and not only on one spot – as it is with traditional spectrophotometers.

Precise color information based on images requires not only more color channels but also a homogeneous illumination and software for color calibration and color calculation. Getting all components from one supplier makes sure that the components fit to each other and makes the first steps easier.

It should be noted that in certain applications, color imaging is no longer enough, such as in currency inspection, electronics manufacturing and food sorting, where specific wavelengths are required that are either outside the visible spectrum or in between the RGB color bands. Multispectral imaging can be used to inspect in the near IR as well – up to 960 nm.

Over the past years, machine camera manufacturers have introduced a variety of 3D methodologies, ranging from time-of-flight analysis and projected pattern correlation, to laser line/triangulation measurements and stereoscopic technologies. Of these, stereoscopic or just “stereo” has recently gained stronger traction, in particular in the semiconductor industry. Components, such as solder balls or pins which are used to connect wafers and dies, have to be inspected with 3D methods to measure precisely the critical height of the conducting elements. The typical dimensions of such components currently are around 50 µm, requiring a high optical resolution of the inspection systems in the range of at least 5 µm.

The basic operation behind stereo 3D resembles that of human vision: two sensors – in this case, linear sensors – in a stereo configuration are combined into one camera, resulting in two images being acquired of the same object from slightly different perspectives. This serves as the basis for triangulation, which involves an object point projected in both stereo images, and two image points that are the positions of the right and left cameras.

By Allied Market Research With people becoming more and more environment conscious, the food and beverage products manufacturers are now seen to adopt a number of changes and make a mark over the environment as […]

By Sean Riley, Senior Director, Media and Industry Communications at PMMI Typically, end of the line operations in packaging include secondary packaging machines like sleevers, tray loaders and case packers as well as transport packaging […] 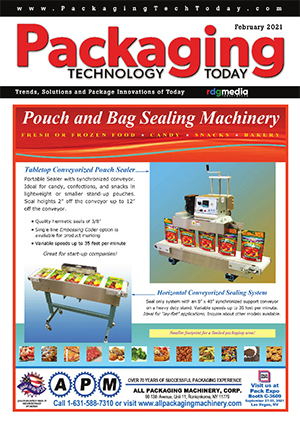