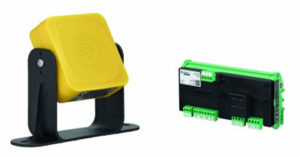 Leuze, a high-tech company and pioneer in the field of optical sensors, announced it has added to its product range. The LBK safety radar system is a new, innovative sensor system that implements 3D safety technology.

The manufacturer of the new 3D safety system is the Italy based company Inxpect S.p.A. The LBK safeguards danger zones close to machinery and systems. To do this, it uses a radar technology that is also used.

The LBK sensor emits its radar waves in three-dimensional space so that not only the surface area but also the volume of this space is monitored, allowing the LBK to detect persons who enter a hazardous area or who are located in this area.

The LBK sensor reportedly utilizes this to reliably distinguish a person in a danger zone from a static object, like a pallet or material container. As a result, the LBK system interrupts the operating process only if somebody is actually located inside the danger zone. In this way, the LBK system reportedly prevents unnecessary downtimes and thereby increases the availability and cost effectiveness of the system.

In addition to use in harsh environments, the LBK safety radar system is used primarily for preventing unwanted restarts and for monitoring hidden areas. Users can adapt it to their individual requirements.

The system consists of a controller to which up to 6 radar sensors can be connected. The positioning of the sensors, the adjustable operating range and the selectable opening angle allow flexible adaptation of the monitored area to the danger zone.