Home » Featureds » Sustainability, One Package at a Time

Sustainability, One Package at a Time 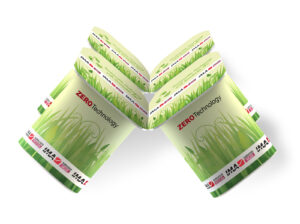 For dairy brand owners, it’s been a conundrum to get away from polystyrene in an eco-friendly, sustainability-conscious fashion, without breaking the bank. Image courtesy of IMA Dairy & Food USA

One of the food industry’s dominant legacy packaging materials, polystyrene, is on its way out. And that’s a very good thing for the health of both our planet and ourselves.

Polystyrene has been used in a variety of plastic packaging applications, including a prominent role in the dairy sector’s fastest-growing segment: yogurts. Portion packs – think of the single-serve butter packs you might get on an airplane – also have been traditionally comprised of polystyrenes.

But this is changing and, as is so often the case, a major U.S. state is leading the broader national charge. California – the nation’s most populous state, whose residents comprise over 10% of the country’s population – was at the forefront of an effort now emerging as a national trend.

Back in 2016, the California Environmental Protection Agency’s Office of Environmental Health Hazard Assessment (OEHHA) began listing styrene as a cancer-causing agent. The decision had roots in a 2014 determination of the US National Research Council, which described styrene as “reasonably anticipated to be a human carcinogen.”

To affect change sooner rather than later, California folded its anti-styrene stance into an existing consumer safety referendum, with the goal of removing styrene from supermarket shelves. And given the state’s sheer enormity and influence, as goes California usually so goes the nation.

A push for recyclable packaging 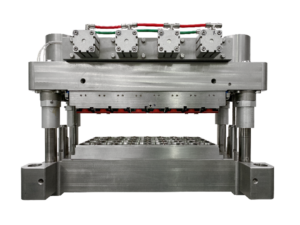 A patented punch process provides high-quality cutting and pre-cutting of PET, and can also be used for polypropylene and polylactic acid (PLA) constructs. This solves for the notoriously cumbersome process of breaking multipacks into individual units. Image courtesy of IMA Dairy & Food USA

In the dairy sector and beyond, this food-contact polystyrene phase out is occurring in conjunction with one of the most sweeping cross-sector trends in decades: the push for more sustainable packaging materials.

The result has been peer pressure at its best. From my vantage point as a packaging equipment supplier to some of the country’s biggest yogurt and portion pack providers, it’s been encouraging to see companies big and small take sizable strides toward reducing their environmental footprint through more eco-friendly packaging materials.

In part, this has been driven by broad consumer demand for sustainable products, as well as technologies to comprehensively communicate such initiatives through websites, on-product labeling and smartphone-scannable QR codes. In today’s consumer landscape, anyone not in on green risks being out in the cold.

For brand owners looking to go greener and get ahead of the polystyrene phaseout, a primary contender has been polypropylene (PP). But sustainability is rarely as simple as a one-for-one materials swap.

While far safer and more recyclable than polystyrene, polypropylene is typically seen as less moldable and manageable from a machining perspective. Often, switching from polystyrene to PP requires sweeping and costly new infrastructure investments. This is because PP requires more heat – and therefore longer, more robust form-fill-seal equipment – to properly form into a sufficiently sturdy cup or portion package.

For dairy brand owners, a growing conundrum has been getting away from polystyrene in an eco-friendly, sustainability-conscious fashion, without breaking the bank. Lofty goals are great, but spending seven or eight figures on entirely new machinery fleets simply isn’t economically viable. 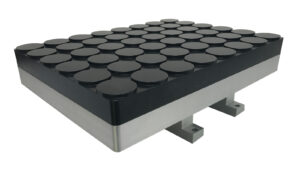 From a sustainability standpoint, it’s hard to say enough good things about PET. Heck, even Encyclopedia Britannica is in on the act:

“PET is the most widely recycled plastic … When collected in a suitably pure state, PET can be recycled into its original uses, and methods have been devised for breaking the polymer down into its chemical precursors for resynthesizing…”

That’s a very smart way of saying PET is awesome.

But while the beverage sector is fully behind PET, its adoption in food sectors – even “soft-serve” foods like yogurts and portion packs – has been far less prolific. Here, one of its strength has become a weakness: PET’s inherent toughness and hardness has made it historically challenging to cut into single-serve units.

Let’s take a moment to realize how frustrating the previous sentence is. What it means is that PET is recyclable, formable, fillable, sealable. And then, just when you’re ready to break a batch into single-serve units … nothing. It’s like running a marathon, then realizing the finish line is on an offshore island.

This inability to complete the production process by cutting PET-packaged items into single units has become a longstanding obstacle to its wide-scape incorporation. So while we might see PET in a full quart of yogurt, individual cups – which comprise the lion’s share of yogurt sales – have been difficult.

Luckily, the sustainability movement has been punctuated by technological progress – and the push-pull between PET and portioning is no different.

Introduced late last year, a set of sophisticated cutting tools is now available ideally suited for food brands utilizing sustainable mono-material packages, including PET. While designed for use with my company’s portfolio of form-fill-seal (FFS) machinery, the cutting tools are equipment-agnostic, meaning they can be retrofitted onto a broad array of FFS machinery.

Importantly for ease of adoption, the new cutting technique employs independent sleeves that allow cup design changes without the need to manufacture an entirely new thermoforming mold. To bolster return on investment (ROI) and reduce total cost of ownership, the tools also can be easily dismantled for hassle-free maintenance, which can significantly extend the mold’s lifespan while maintaining peak performance.

For example, outfitting a formed cup with a PET lid and label creates a completely recyclable package for premium sustainability. In addition, the use of transparent mono-materials makes the product visible to consumers, enhancing on-shelf aesthetics.

It is this sort of “practical sustainability” that can and must lead to a heightened eco-consciousness that meets the needs of our planet while being easily adopted by brand owners and highly appreciated by consumers.

Honeywell and TotalEnergies announced a strategic agreement to promote the development of advanced plastic recycling. Under this agreement, Honeywell will supply TotalEnergies with Recycled Polymer Feedstock ...
Read More →

Packaging Waste Management Is In the Spotlight

Expansion of e-commerce is causing a spike in unrecyclable materials. Best Practices for Circular and Sustainable Packaging By Allison Berg, Sustainability Manager at DS Smith With ...
Read More →