Are Machines Stealing Our Jobs? 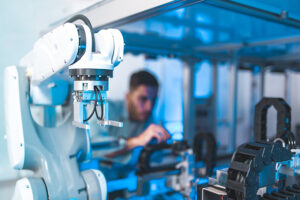 The history of man and machine is a long, turbulent one. The fear of technology replacing human workers is far from a new idea. The Luddite Fallacy is one that has been prevalent throughout human existence and follows us into modern time. But when did this saga even begin – and where is it going?

The metamorphosis of machine labor

Out of necessity, local peasants would spin raw wool into suitable clothing for themselves and family members. Eventually, the wealthier class began craving finer garments, which created the wool-cloth industry.

It worked like this: Merchant clothiers, or entrepreneurs, saw the demand and opportunity. They would purchase massive quantities of raw wool and track their progress through all production stages. Those with the deepest pockets began buying in bulk leaving little competition. These were considered some of the first monopolies.

As advancements in effective tools became more prevalent and accessible, it developed new concepts and practices. For example, another significant invention to come out of this time was water and wind power. These unmanned technologies were so effective it unwittingly founded the practice of replacing human labor with machine power.

As societies developed, the desire for novel inventions faded, and there became a preference for adaptable innovations for devices they already owned. Water and wind power, combined with older forms of technology, revealed untapped possibilities of production scale. This is the most primitive form of what we currently call a factory system.

The catalyst for automation 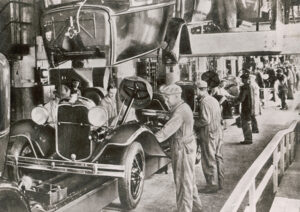 Henry Ford modeled his original assembly line after the meatpacking structure, and reduced total production time for an automobile to 93 man-minutes.

Hints of industrialization and capitalism have been prevalent throughout history. But the major catalyst that pushed both ideas forward in America came down to output.

The term mass production relates to the strategy of large production scales at low costs. Inside factories, there’s an organized flow of high volume material from beginning to end. This also assured quality control through supervision and division of labor.

Things only moved faster with the emergence of the machine-tools and interchangeable parts.

Machine tools were power-driven and bolted down. They were charged with shaping or forming various materials, such as metal. These innovations soon became fundamental to advancements in mass production. The US excelled with these technologies so much it was dubbed the “America System.”

America led the Industrial Revolutions in more than one way. The “true ancestor” of the assembly line dates back to the late 19th Century in the American meat processing industry.

Workers in Cincinnati and Chicago would use overhead trolleys to disassemble carcasses by passing them to different production areas. Stationary workers performed a single task at a dictated speed, which minimized movement and increased productivity.

One influential man took notice of this process. Henry Ford, the American automobile manufacturer, modeled his production line off the meatpacking structure and introduced his assembly line operation in 1913.

Ford’s next game-changer was his unique approach to chassis assembly. Under the old system, it took 12 ½ hours to drag a chassis, metal frame of a car, to each station. Ford decided to tie a rope to a frame to pull it past several lines until it reached its final destination. This cut production time to six man-hours.

By the end of April 1914, the assembly line was upgraded to be pulled by a chain, which resulted in an astounding total production time of 93 man-minutes. Thanks to Ford’s innovations, prices of automobiles drastically fell providing the middle class the chance to own private vehicles.

“Manufacturing provides well-paying jobs for many people and provides goods that power our economy and protect people’s health,” says Darrell West, director of the Brookings Manufacturing Initiative, whose team focuses on the future of manufacturing via email. “Sectors such as automobiles, electronics, pharmaceuticals, and semiconductors are vital for U.S. national security and competitiveness.”

In the 1940s, the Ford Motor Company defined automation as a concept. For the automotive company, the initial meaning related to autonomous handling of tasks in metalworking production. The modern understanding represents the goal to subtract human hands from the production process to ensure accuracy and quality.

The introduction of computer aided manufacturing

In 1943, American mathematician Norbert Wiener gave automation a broader context by introducing cybernetics. While the tech’s full potential was not seen in his lifetime, Wiener knew it was only a matter of time before manufacturing would recognize the value in applying computers to the sector.

Beginning late in the 20th century, Wiener’s prediction finally came to fruition with the arrival of computer aided manufacturing (CAM). This software and computer-controlled machinery were designed to modernize manufacturing, which gave operators access to automatic control systems. The average CAM could adjust the position of a lever or machine without the human element, but these devices lacked speed, size, and sensitivity. 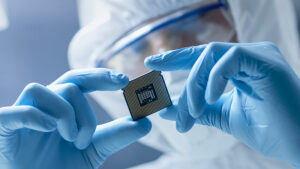 The most important recent innovation has been computer chips, which are crucial for digital goods and services and vital for the overall economy.

The most important recent innovation has been computer chips, which are crucial for digital goods and services and vital for the overall economy. We cannot make cars, produce goods, or provide needed services without chips.

Even more impressive is how these machines can produce small batches of material that allows for it to be applied to various products and components. This offered avenues to achieve what was exclusively available through mass production of identical objects.

This is where we begin to establish the modern era of factory automation, or, as some like to call it, smart factories.

As history has demonstrated time and again, technology wins in the long run. Things like end of the line packaging automation have become essential to keep up with post-COVID demand.

“After COVID, companies are far more open to automation and technology,’ says Scott Hamric, Senior Sales Executive at RIOS Intelligent Machines, who adds that the evolution in the industry is the only way to evolve and stay competitive. “The customer realizes this is the future, and early adoption of tech will help them to get in front of the next potential labor issues in this new fast-paced economy where labor shortages are common.”

As of now, there is a massive shift in the manufacturing industry. The labor shortage makes it glaringly obvious that the speed at which we advance technologically as a society tends to leave workers behind.

These days, the numbers for labor are abysmal, especially within the durable goods manufacturing industry. As Deloitte reports, even if every qualified citizen was gainfully employed, this sector would still have openings for 35% of its positions to meet production goals.

Deloitte goes on to predict that by 2030 there will be a labor shortage of at least two million American manufacturing jobs. This amounts to about a trillion dollars per year.

As Boomers and “old scholar’s” exit the workforce, the newer generations are expressing little interest in manufacturing.

It isn’t a secret that factory management has consistently demonstrated negligent practices related to worker treatment. This notorious reputation has done little to appeal to the up-and-coming generations. Instead, they are moving towards opportunities that offer stable, safe work environments and provide compensation. 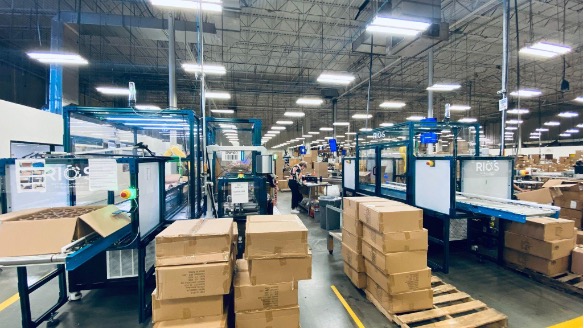 The factory of the future

But after the COVID-19 spike in global demand, it also revealed an overarching theme that can leave certain economic aspects vulnerable.

While the displacement of certain roles is inevitable, the importance of automation on production lines cannot be understated. These factors are essential to uphold the economic system we’ve built.

In the process, there is room to upskill workers to perform higher-level and better paying tasks that are appealing to a new labor market. New roles such as “robot supervisors” are designed for employers and employees to succeed.

In the 21st century, machinery is approaching levels of dexterity that are not only matching the skill of their human counterparts but outperforming them. Manufacturing is now an automated game, and the consumer packaged goods sector has experienced the brunt of it.

With the explosion of demand on production, along with a lack of bodies, it shows that producers cannot keep up. Manufacturers are hoping that things like fully automated “smart factories” will hold the key to post-COVID success.

Tess Danielson spent six years as a journalist before founding her nonprofit centered around documenting how communities change over time. She currently writes automation and robotics content for RIOS Intelligent Machines.

The Schubert Group will return to the International Baking Industry Exposition (IBIE) in Las Vegas, in September, and will showcase its lightline Cartonpacker. The preconfigured case ...
Read More →